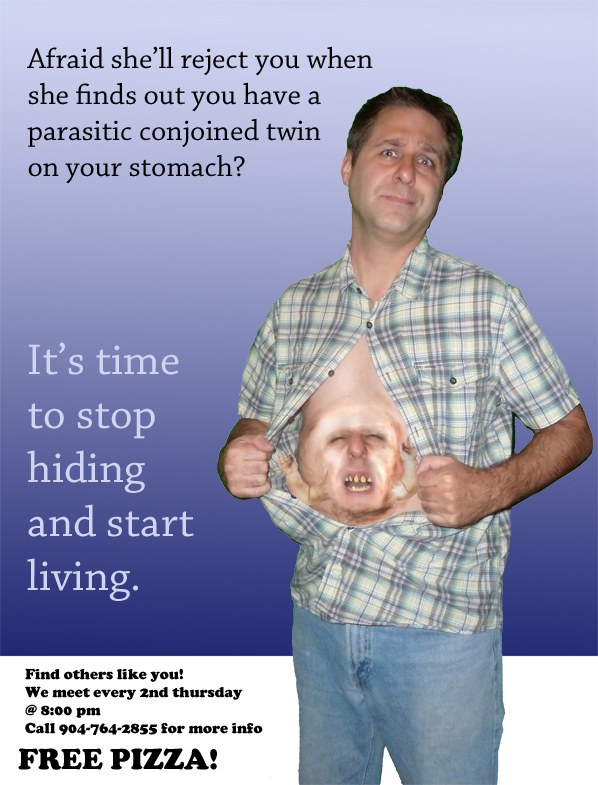 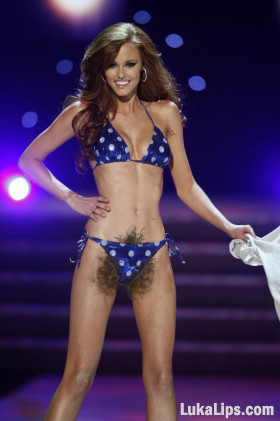 I can't put my finger on it, but something seems very natural about her to me. Maybe I'm wrong, but I almost feel like she's the kind of girl a guy could take camping.

We here at LukaLips Destruction Co love the big G. While we await his triumphant return, you can show your faith in the king of all monsters by ordering one of these bumper stickers.  Spread the word!  Get one here. 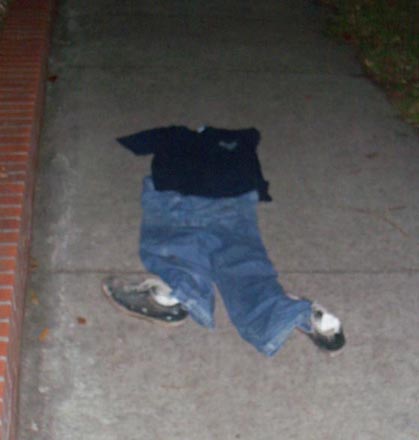 Troy Lukkarila's clothes were discovered on the sidewalk outside of his home in Jacksonville, Florida. Authorities have not been able to locate Troy, however, we're not sure they're actually trying to locate him. At this point we can only assume that Troy was raptured away by the holy spirit and he is enjoying his time in the kingdom of heaven where God can finally bask in Troy's glory.

We perhaps were a little premature in our assertion that Troy Lukkarila was raptured away to heaven. He was discovered the next day dazed and confused, naked in a ditch, several miles from his home. He was unable to recollect exactly how he got there. 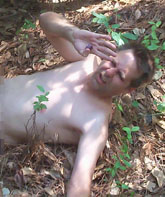 Troy later made the following statement: "Look, I may not have been raptured, but this was still God's work. I mean, if being transported several miles away from your house isn't proof of God, I don't know what is... or aliens. It could have been aliens. Anyway, whatever it was, it had nothing to do with me being really drunk."

REGARDING THE ROYAL WEDDING 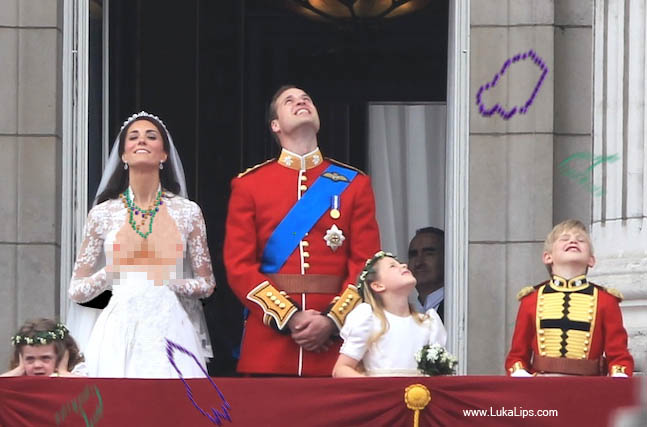 I simply have to say that I don't think it was appropriate for the Duchess of Cambridge to be flashing her tits like that on the balcony of Buckingham Palace! And to be doing it for some stupid beads! How low class is that? Doesn't she know the U.S. is still recovering from Janet Jackson's tit? 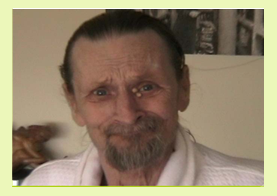 Goodbye, Maestro.
Here is an excerpt of one of last videos I shot of Alan Justiss:

TROY LUKKARILA LAMENTS ON THE DEPARTURE OF THE CATHY COMIC STRIP 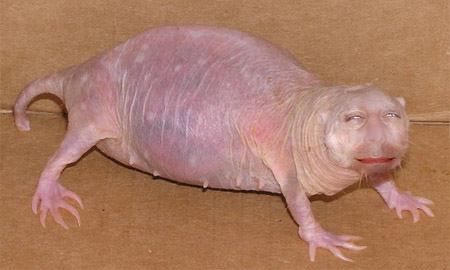 There was much celebrating in the labs of Lukalips Destruction Co., this weekend. Chants of "We did it! We did it!" were heard emanating from the offices. They are celebrating a breakthrough in human/animal gene splicing. Scientists in the Lukalips'; genetics lab have successfully combined the genes of company leader Troy Lukkarila with the genes of several other animals to create a brand new species. Said one scientist, "It has always been my dream to create an abomination of nature.

"We still have much to learn," explained scientist Dr. Linda Snardgrass, "We don't even know what to feed it, except we have found it to have an affinity for beer. So, we just kind of keep it liquored up." When asked what animals comprise this new species, Dr. Snardgrass replied "Hell, I don't know. We threw all kinds of shit in there. We kind of lost track."

I learned about ileostomies this weekend. It's a medical procedure where the end of the small intestine is diverted through a hole in the abdomen. Here is a photo of an ileostomy I stole from Wikipedia: 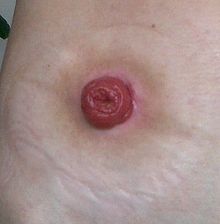 What I found especially interesting, is that this procedure goes all the way back to the ancient Greeks and Romans. Back then, ileostomies were regarded as beautiful. In fact, almost any depiction you find of Venus, the goddess of love and beauty, includes her ileostomy. For instance, Venus de Milo, probably the most famous depiction of the goddess, clearly shows her ileostomy: 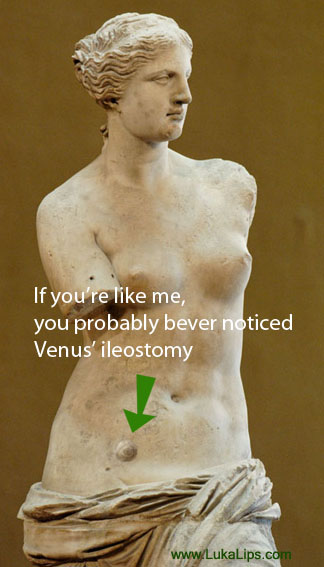 Botticelli went as far as to include oozing bile in his famous depiction of the Birth of Venus.

I'm amazed that I never noticed the ileostomy in the above painting. I guarantee, however, now that I've pointed it out to you, it will be the first thing you notice every time you see that painting. Make sure to point it out to your friends! 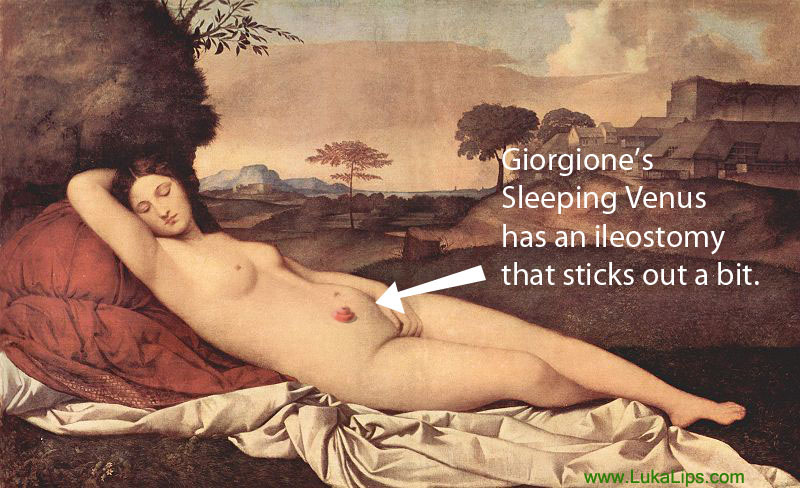 One can only speculate why these ancient peoples found ileostomies so attractive. Of course, what red blooded male is not going to look at an ileostomy and wonder "Can I stick my junk in that?"

I was reading the comics in the newspaper yesterday. After I laughed incessantly for a full five minutes at Marmaduke (he had eaten somebody's sandwich or some shit or something, a thought came to me – this story-less one-panel comic really lends itself for a live action movie! I mean, it's got everything a successful movie needs... well, it's got a big dog! And he gets into all sorts of trouble because... you know... he's a big dog. And... I guess that’s the main theme of the strip. So to give a Marmaduke movie a little of that extra pizzazz, maybe they could use some of those digital effects and shit and make Marmaduke talk! I mean can you imagine? A talking dog! It’s absurd! It’s genius! I can’t think of any other movie where live action animals talk... well, except for Babe, Stuart Little, Beverly Hills Chihuahua, Doctor Doolittle, Doctor Doolittle 2, Doctor Doolittle3. Ok, so there have been a few, but this is Marmaduke and he’s a big dog! I mean, not Clifford big, but pretty big. But to make this movie a mega-hit, we’ll have to break from the comic a bit and have Marmaduke do some distinctly un-doglike things. Hey, I got it! He should wear sunglasses and surf! Yeah that’s the ticket! Hell, and why only have one stupid dog star the movie? Let’s have lots and lots of those fucking talking animals! Fuck yeah! Let's put those computers to work! Oh, fuck me... I just had a brilliant idea... there should be a fucking huge-ass dance number with all the animals! Is anybody getting this? This is going to be so fucking awesome! I am so fucking coked up right now! Only one last thing – who is going to do the voice of Marmaduke? I wonder what Owen Wilson is up to?
For your enjoyment, here are a few of my favorite Marmaduke comics: 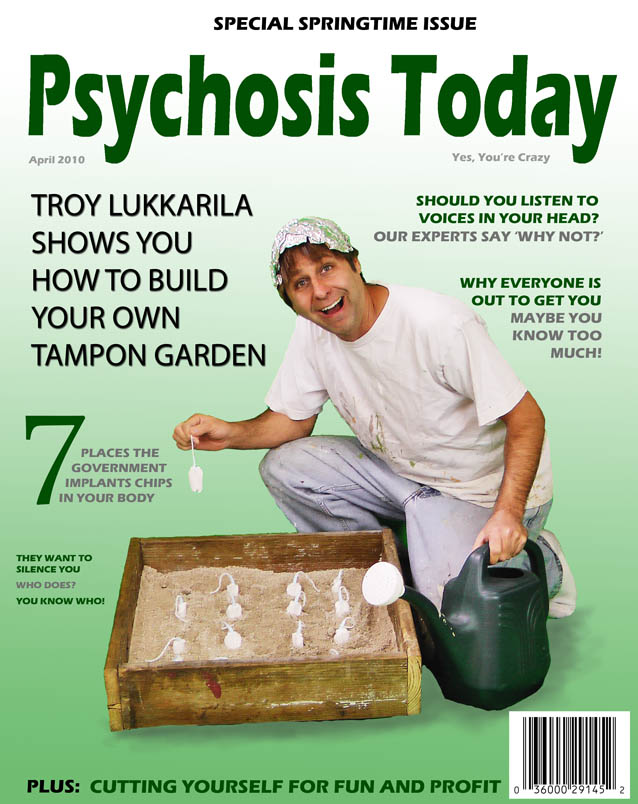 BROTHER CAMPING IS A FUCKWAD

In case you're not familiar with Harold Camping, a.k.a. Brother Camping, he’s an 88 year old host of a Christian call-in radio show. There is plenty of information on this guy on the internet, so I’m not going to give you a biography. Just Google his name, you lazy fuck, and go to town!

I've listened to Brother Camping periodically for over a decade -- his show has played in every city I've hid in. I’ve heard him on more than one occasion tell a woman that she must get back together with her abusive husband because she made a promise with God when she married him. If she remarries, it’s adultery – plain and simple. Who knows, maybe some women ended up dead because of this wonderful advice. Nice job, Campy!

I was listening to his show last night and learned that based on clues in the Bible, he has calculated the day of the rapture! For your information, that day is May 21, 2011. Mark your calendar, I guess. Might as well cancel any appointments you have after that date. A man called in to the show and told Brother Camping that he believed the bible, but he could not believe that May 21 of next year was going to be the big “R” day. The man stated he was a Christian and asked Camping if the rapture did come next year, was he going to go to hell because he didn’t trust Camping’s date. To paraphrase Brother Camping’s answer he said basically, “I can’t judge you, only God can do that, but yes, you’re going to hell. The day comes from the Bible so it is God’s word, therefore it’s infallible. Oh, don’t think you're going to get saved after the rapture because it’s too late.” Sorry, I’d give the actual quote, if I could find a transcript, but seriously, that’s the gist.

I hope the old fuck lives another year to see that his inflexible prediction is wrong. And maybe, just maybe, he will realize that the world is not so black and white. Maybe he will see the bible is open for some interpretation. Maybe he’ll apologize for all the bad, inflexible advice he’s been giving for decades. But we all know what will happen – he'll admit to making some miscalculation and change the date and he’ll continue being a complete ass-wipe and he’ll resume scaring of the bejesus out of the poor sheep.

For your convenience, so you can say your good-byes and get your affairs in order, I present to you Brother Camping’s Rapture Countdown Clock:
Sorry... the countdown clock went off years ago. Looks like you were left behind with Brother Camping. Sucks to be you. Wait.... I was left behind, too. Damn. 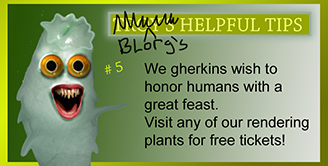 It's been morning all day long. 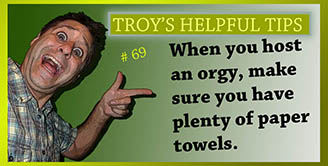 I don't want to hear about your problem. I'm still trying to deal with my inability to throw away pen caps. 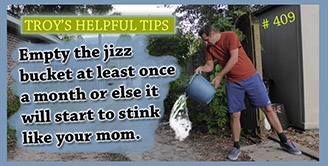 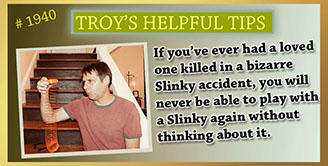 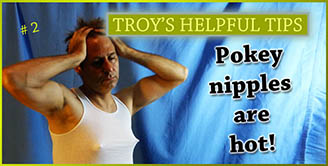 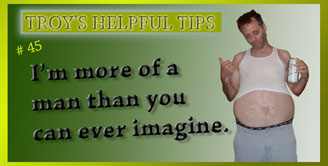 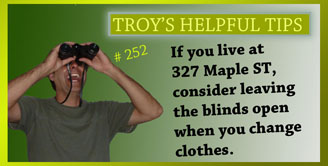 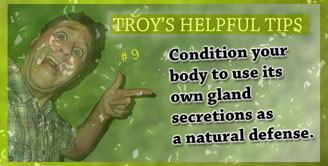 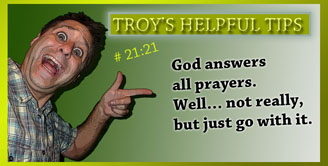 When I looked in the toilet and saw undigested corn I didn't think it unusual until I realized it was still on the cob. 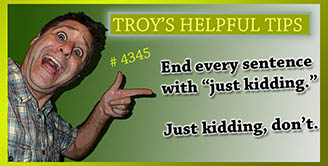 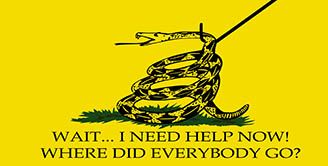 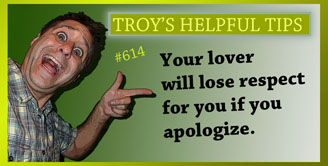 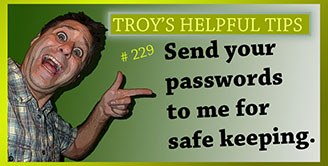 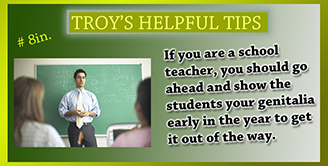 I'm wanted by the law, but at least I'm wanted. 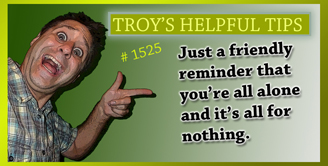 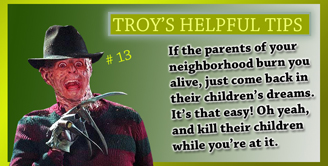 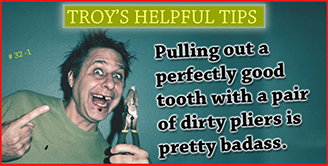 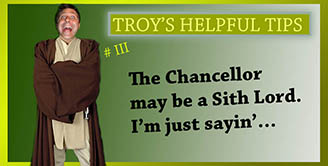 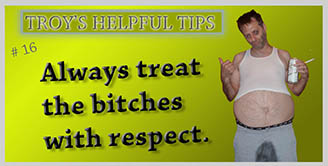